New To Call of Duty/Modes/Hardpoint 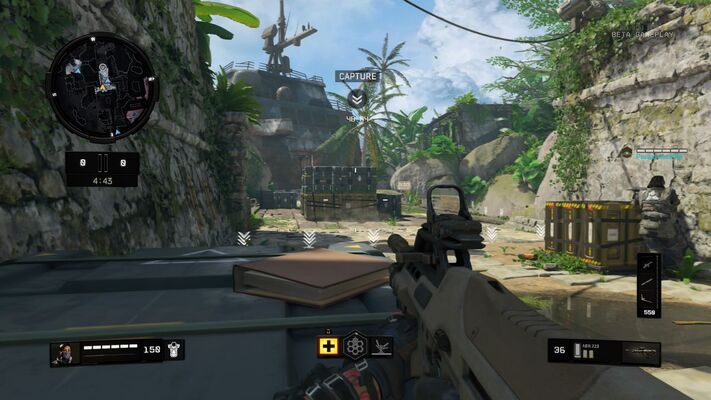 A Hardpoint objective. Teams earn points for spending time within the objective. Source

Hardpoint is the fastest playing game mode in competitive Call of Duty, with a series of rotating objectives that keep players on the move. Throughout the course of a match, players from both sides attempt to hold these positions in order to earn points for their teams. Learn more about Hardpoint:[1]

In Hardpoint, teams fight to control rotating objective areas on the map. A team earns a point for each second that a player occupies a Hardpoint uncontested. After 60 seconds has passed on an objective, the active objective relocates to a new location on the map. The first team to score 250 points wins the match.

The fixed objective rotation plays a key role in the strategy of Hardpoint. Objectives move in the same set order in every match, allowing players to anticipate the next area of contention. The concept of “rotating” or moving early is engrained in players at the highest level, as they concede the final points in the current objective to set up defenses in the new objective area.

In addition to objective positioning, players are also tuned to the positioning of both teammates and enemies. Players are in constant communication during the match, calling out the positions and pathways that they are covering. The same goes for enemy awareness, with teammates sharing their view on the enemy so that no one breaks through unscathed. Players still need to win their gunfights, but great positioning and support can allow a team to maintain a constant presence in an objective.

Comebacks are a thrilling part of all competition, and Hardpoint provides the perfect stage for close matches. If a team can set up an impenetrable defense at consecutive Hardpoints, they can easily make up any point difference on the scoreboard. Aiding the underdog cause is the game timer, which counts down only if a player is occupying a Hardpoint. Instead of playing passive defense and letting the time limit save their win, leading teams now have to stay engaged for the entire match to seal their victory.

There are few moments in Call of Duty eSports that are more exciting than a Hardpoint game decided on a final hill. Everything is on the table at that point, as Scorestreaks, Specialist Weapons, and Specialist Abilities are all drawn to swing the battle in a team’s favor. Yet so often it comes down to that one gunfight in the objective that makes the difference between a heart-stopping victory and a heartbreaking defeat.